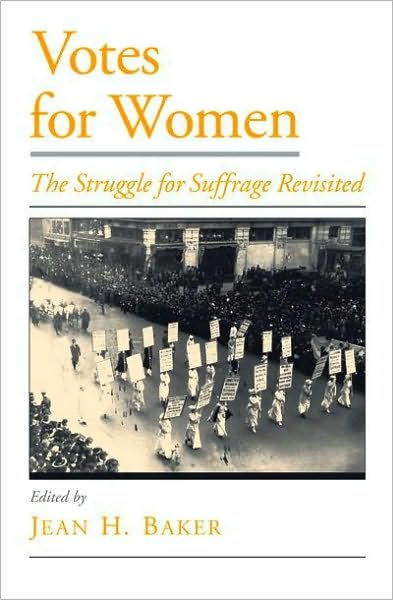 Join us in reading the third book in our Book Club Series! In Votes For Women, Jean H. Baker has assembled an impressive collection of new scholarship on the struggle of American women for the suffrage. Each of the eleven essays illuminates some aspect of the long battle that lasted from the 1850s to the passage of the suffrage amendment in 1920. From the movement’s antecedents in the minds of women like Mary Wollstonecraft and Frances Wright, to the historic gathering at Seneca Falls in 1848, to the civil disobedience during World War I orchestrated by the National Woman’s Party, the essential elements of this tumultuous story emerge in these finely-tuned chapters. So too do the themes and historical controversies about suffrage and its leaders, including Susan B. Anthony, Elizabeth Cady Stanton, Sojourner Truth, and Alice Paul. Contributors focus on how the suffrage battle was interwoven with constitutional issues at the federal and state level and how the suffrage struggle played out in different regions, especially the West and the South, as well as the activities of opponents to women’s voting. Baker’s introductory essay sets the stage for revisiting suffrage by making explicit the similarities and differences in interpretations of suffrage and shows how the movement intersected with other events in American history and cannot be studied in isolation from them. This volume is essential reading for those interested in American politics and women’s formal participation in it.

Stephanie Freese will be facilitating the book discussion on November 17, 2021 from 2-4 PM. She is the Program Specialist for the Women’s Rights National Historical Park.

Books are available to pick up anytime at the Seneca Falls Heritage and Tourism Center and should be read before the November discussion.  Call 315-568-1510 or e-mail director@senecamuseum.org to reserve your spot!

This program was made possible with support form Humanities New York.